Most everyone can remember the children’s story of Jack and the Beanstalk. Young Jack was sent to the market to sell the family cow for some money, but instead was conned into buying some “magical” beans. Horrified and disgusted, his mother rebuked him for such a foolish act and threw the beans out of the kitchen window. The following morning when Jack looked out the window, there was a beanstalk which had grown high into the clouds above. The remainder of the story keeps children sitting on the edge of their seats. Of course, no one has ever seen anything grow up overnight, unless, of course, it happens in a Disney fantasy.

As much as man has sought to create a life in which every desire is fulfilled instantaneously through instant foods, remote controls and other technological marvels, he still recognizes that in this world growth and development are slow and deliberate. Growing up overnight only occurs in children’s fairy tales and not in everyday life. However, is such an idea impossible with God?

By far the most common creationist answer to the dilemma about the age of the universe and the light coming from distant galaxies is that when God created the distant stars He created “light trails” connecting them to the Earth. In other words, when God created the stars and flung them into the heavens, the light waves may have been created fully extended, the light immediately spanning space to the Earth. Before you decide that such an idea is totally absurd, let me ask a simple question. What is more unbelievable and difficult to accomplish—creating light or moving light once it has been created? Or to put it another way, what is harder to do? Create and manufacture an automobile or move an automobile once it has been manufactured?

The Bible states that God is all powerful and that nothing is too difficult for Him. If God is the creator of light (He created the entire physical creation instantaneously and out of nothing), then surely He has the power and ability to instantly move that which He created.

To the unbelieving skeptic, this probably is one of the most unacceptable explanations used by the creationist. To him this seems as ridiculous as the fable of Jack and the Beanstalk. Although there are other possibilities, no matter how reasonable any explanation may be, the atheistic evolutionist has already preset his mind against the possibility that God can exist. Therefore, all the evidence in the world will not make one speck of difference.

The creationists’ reference to a “special creation with the superficial appearance of age” means that the physical laws which God used during creation week were very different laws than those we see operating in creation today. For this reason, there are limitations in the realm of nature today which did not exist during creation week. These limitations came into operation after the rebellion (fall) of man. It was at this time that the curse, or the law of decay known in physics as the second law of thermodynamics, took effect.

Once again the entire issue boils down to the question of God’s existence. If God exists, then nothing is too difficult for Him. On the other hand, if He doesn’t exist, then the unbelieving skeptic is free to be god and sit on the throne of his heart without fear of repercussion.

When is an Antique New?

Near the city of Dallas, Texas, where I was raised, there are many small country towns. Each usually has a general store selling new and used antiques. Such a combination of words seems contradictory. By definition, antiques cannot be new; and if they are new, then by definition, they cannot be antiques.

The term “new antiques” refers to items which appear to be very old but are actually brand new. For instance, there are specially designed tools which help make furniture look old. There is a drill for making holes that look like wormholes, and there is paint which makes things look antique.

I recently bought a dozen old-looking coins in Bethlehem. They appear to be coins from around the 1st century B.C. These coins look genuine; however, they are made for tourists. They appear to be very old and yet were made a very short time ago.

There are numerous examples of newly produced products with two ages, the actual and the apparent. For example, there are the trendy fashions which attempt to create a well-worn look, although they are brand new. Presently designer jeans have such a look. Then there are homes and office buildings modeled after 18th-century architecture, and yet they have just been constructed. (see fig. 17.) 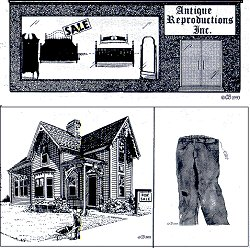 A “new antique” then, is an object created with both actual and apparent ages. Such was the case when God created Adam; he had two ages—the actual and the apparent. He appeared to be a mature adult. But his actual age would be calculated from the moment God breathed the breath of life into his nostrils (Gen. 2:7). We cannot even speak about creation from a biblical perspective without an understanding of the reality of a real age and a superficial age.

The Purpose of Light

All of God’s creations had a superficial appearance of age as soon as they were created. When God created the stars, He created each with two ages—the actual age (new) and the apparent age (ancient). One of the reasons God created the stars was to give light to the Earth. So it is logical to assume the stars’ light reached the Earth the moment they were created. The actual age of the light was “new”; however, the apparent age was “ancient.”

Consider the miracle of Jesus’ changing the water into wine. Mary, the mother of Jesus, approached her Son with a request for help. There was a need for more beverage for the wedding festivities. Jesus performed a miracle by turning plain water into wine. The miracle was of particular significance, which the guest of honor pointed out.

… and the master of the banquet tasted the water that had been turned into wine. He did not realize where it had come from, though the servants who had drawn the water knew. Then he called the bridegroom aside and said, “Everyone brings out the choice wine first and then the cheaper wine after the guests have had too much to drink; but you have saved the best till now” (John 2:9, 10).

The custom at such occasions was to supply the most expensive and best wine at the beginning of the celebration, and when everyone had enjoyed their fill, then the less expensive and common selection of drink was provided. However, as the guest of honor of the feast noted, the quality of the wine served at the end of the wedding festivities was exceptional, meaning it was aged.

In the making of wine, after the fermentation process ceases within the grape, the juice goes through a maturing process for several months or years before it is considered of excellent quality. However, Jesus accomplished this transformation instantly. The wine, only minutes old, had the “taste” of age. It had an actual age (new) and an apparent age (old).

All Miracles of Christ Reveal a Superficial Appearance of Age

All the miracles of Jesus illustrate the concept of the instantaneous having a “superficial appearance of age,” and the revelation that God is capable of the impossible. Remember the man who was born blind and how Jesus restored his sight instantly? The skeptics who didn’t believe in instantaneous healing had a problem accepting the story (John 9). Why? Because they were only accustomed to seeing the gradual process of the way things happen naturally.

During creation week, God commanded the Earth to bring forth fruit trees. He didn’t create seeds first and then wait a number of years for them to grow to maturity. God’s command resulted in the creation of fully mature objects that had a superficial appearance of age.

The whole cycle of life began with adult organisms rather than embryonic forms. To believe that the reverse is true requires an endless supply of miracles—a fertilized egg surviving outside of a mother’s womb, infant mammals continuing to live without a mother’s care and an endless number of other miracles far beyond that of Jack’s beanstalk.

When the Earth was only one week old (actual age), there were mountains, valleys, sandy beaches and forests. Nature takes hundreds and thousands of years to form these phenomena (apparent age). But God created them instantaneously. Why is it so difficult for some to believe that God created the starlight to span instantly throughout the heavens and reach the Earth?