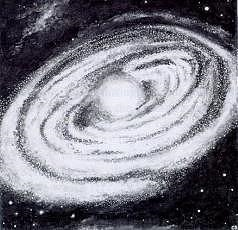 Faster than a Speeding Bullet

The Andromeda Galaxy is a large one composed of billions of stars. It is a galaxy similar to our own. It is two million light years away from Earth. (see fig. 16.)

Figure 16. LOOKING BACK IN TIME 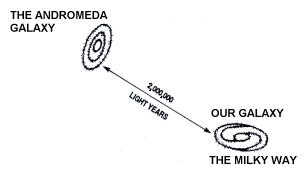 When we look out into the universe, we are looking back in time. Thus, when we look towards the Andromeda Galaxy, we are not looking at it is today, but rather as it was in the past. At the present speed of light, it takes two million years for its light to arrive at our planet. If that is how long it takes light to travel, how could light coming from distant galaxies millions of light years away already have reached our planet if creation took place only about 6,000 years ago?

Over the years, the evolutionists’ most persuasive argument for an ancient origin of the universe has been the speed of light. This argument is based on the present measured speed of light (186,000 miles per second)—the time it now takes light to travel. Some stars and galaxies are believed to be billions of light years from Earth. Could it be that scientists are mistaken about the immense size of the universe and the distance to the farthest known objects in the heavens? Even if they are mistaken, it is still difficult to believe that such remote stars are not more than 6,000 light years away.

According to the studies of some astronomers, light may take a “shortcut” as it travels in deep outer space. If their theory has validity, it suggests that it does not take light nearly as long to reach the Earth from outer space as is commonly believed. By the use of certain mathematical calculations, it is speculated that light could reach the Earth from the fartherest known star in about 15 years. (See Richard Niessen’s “Starlight and the Age of the Universe,” ICR Impact, July 1983.)

How then is it possible that the entire universe could be only a few thousand years old? Many evolutionists believe that the speed of light has scored a sound victory for them and that creation science has suffered a setback. However, this is far from the case. There is a solution to the dilemma which is simple and yet profound. When God created the universe, He created a fully developed, fully functional and mature universe—one which had a superficial appearance of age. This is the biblical doctrine of mature creation.