Birth-Age of Planet Earth – 7 – Solar Sweeper in the Sky

Solar Sweeper in the Sky 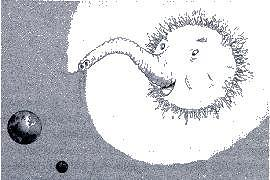 There is another kind of clock associated with our discussion of cosmic dust. It has to do with the dust particles in space which are being swept away by the sun’s powerful gravity. The tiny cosmic dust particles, the same ones that settle on the moon, exist throughout the entire solar system. Our sun is vacuuming up these dust particles. Measuring the amount of time it is taking the sun to vacuum up the dust represents another type of natural clock by which we can estimate the age of the solar system.

To better understand how this clock works, think of a person who is employed by a professional janitorial cleaning service and is responsible for vacuuming a 20-story office building. By calculating the time it takes to vacuum the carpet on one floor, since all levels are exactly alike, we can determine approximately how long it will take him to complete the entire 20-story building. The amount of carpet that has been swept makes for a kind of clock that indicates how long the carpet cleaning person has been working at the job. The more carpet that has been swept, the more time has passed since the job began.

Now imagine a huge carpet the size of our solar system—our sun with all of its planets orbiting within it. The sun is the professional janitor in the solar system; it constantly “vacuums” the smaller particles of dust and debris. Its suction power is enormous. Astronomers tell us the sun is sweeping space with its powerful gravitational vacuum field at the rate of about 100,000 tons per day. The planets’ gravitational fields also serve as solar sweepers.

At the present rate, the sun and the planets are vacuuming the dust in our solar system, most of it should have been removed in less than 15 million years. However, the average size and location of most of the particles of dust in the solar system indicate that they are less than 10,000 years in age.

From an evolutionary perspective of 4½ billion years for the age of our solar system, all particles up to three inches in diameter should have been swept into the sun up to the distance of Jupiter—unless some cosmic neighbor has been sweeping the dust out of his galactical home and distributing it throughout our solar system. Could this be where the missing moondust has gone? Maybe it was blown off the moon back into space during a “big sneeze” from the sun during one of its solar storms!

Seriously now, the Bible has the answer: Creation was a recent event—one that took place around 6,000-10,000 years ago.