Any one for a Hot Potato?

Figure 13. ANYONE FOR A HOT POTATO? 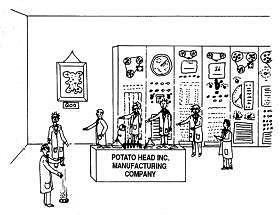 Overnight, the issue of moon dust disappeared out of sight as if it had been sucked into a black hole. The issue was dropped like a hot potato. In spite of evidence to the contrary, most evolutionists maintain their dogma of vast eons of time since the origin of the universe. Their only alternative would be to admit error. So instead of accepting the obvious, evolutionists continue to look for some other explanation for the small amount of dust on the moon.

Evolutionists have tried to skirt the moon dust issue by suggesting that prior to the Apollo moon mission, the majority of scientists didn’t believe there would be much dust and that it was only a minority fringe group that thought otherwise. If this is true, then why was an extra one billion dollars spent (a conservative estimate) prior to the first Apollo moon mission because of concern about the dust problem? For example, as early as 1959, atheistic Isaac Asimov, a prolific writer, predicted that meteoritic dust upon the moon was at least 50 feet deep. (Science Digest, Jan. 1959, pp. 33–36).

The scientists’ concern for the safety of the men is to be admired. Such a concern has its roots in the Word of God. On the other hand, there is little or no concern for human life (other than one’s own) outside of the Bible. It is evident that humanists, atheists, pagan religions and evolutionists have no basis of concern for human life. That is why over 1.6 million babies are being slaughtered each year in abortuaries across the U.S. Such a holocaust is the result of the indoctrination of humanistic evolutionism.

The Truth of the Matter

Some evolutionists have attempted to discredit the importance of the dust issue. But the truth of the matter is well documented in various publications. For example, The Rand McNally New Concise Atlas of the Universe (1978, pg. 41) states, “The theory that the Maria (Mare Tranquillitatis) was covered with deep layers of soft dust was current until well into the 1960s.” Furthermore, once the astronauts were safely back on Earth, they were invited to be on Bob Hope’s nationally-televised special. Hope asked Neil Armstrong what his greatest fear was before he set that first historic foot on the moon’s surface. Without hesitation, Armstrong responded that his greatest fear was regarding the moon dust layer that scientists had told the astronauts to expect.

The best source of documentation that evolutionists did in fact believe there was a deep layer of dust on the moon is found in textbooks. Evolutionists were much more candid before creationists began forcing the issue.

For example, we read in Dynamic Astronomy:

The moon was for many years characterized as having a thick layer of dust covering its surface, into which an object would sink if it landed there.

How do we account for such a small amount of moon dust if the moon is, in fact, several billion years old? We know the rate at which cosmic dust falls on the Earth and the yearly accumulation. If we assume the rate has not varied throughout time, as even the evolutionists maintain, then how do we account for an accumulation of only a couple of inches on the moon? This is the question, and it is yet to be answered logically and reasonably by evolutionists. The answer is quite simple. The moon and the Earth are not 4½ billion years old; but rather, as the Bible reveals, less than 6,000 years.

Scientists tell us that the mountains of the moon are eroding due to radiation from the sun and from outer space. This invisible radiation is striking the surface of the mountains, eroding them. In the mid-1950’s, R. A. Lyttleton, highly-respected astronomer and consultant to the U.S. Space program, wrote:

The lunar surface is exposed to direct sunlight, and the strong ultra-violet light and X-rays can destroy the surface layers of exposed rocks and reduce them to dust at the rate of a few ten-thousandths of an inch per year. But even this minute amount could—during the age of the moon—be sufficient to form a layer over it several miles deep.

Now a few ten-thousandths of an inch a year isn’t much dust; but when you multiply even this infinitesimal amount by 4½ billion years, it amounts to 20–60 miles of dust—on top of the previously mentioned missing cosmic dust! If our astronauts had sunk into miles of dust on the moon, the evolutionists would have proclaimed this as “proof” of the great age of the moon. But they found only enough dust for footprints.