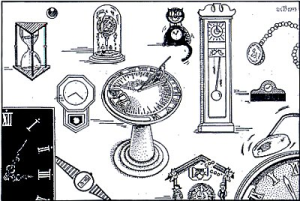 Throughout history man has found ways of knowing the time of the day and of the year. Clocks can be found on city towers, cars, computers, calculators, checkbooks, coffee-makers, radios, rings, submarines—or just about anywhere. Nature also has provided many natural clocks which provide man with ways of telling the time of day, the time of year and even the ages of the Earth, moon, sun and the universe.

Geochronology is the science of determining the age of the Earth by geological events. Geo means Earth and chronology has to do with a time sequence. Scientists are aware of over 80 ways nature indicates the Earth’s age. These are called “geologic clocks.” These clocks are based on natural processes that are presently occurring and can be measured.

An example of one such natural process would be the formation of diatomaceous Earth which was previously mentioned. Another example would be the rate dust is falling to the Earth (illustrated in the following chapter). The majority of “geologic clocks” give a relatively young age for the Earth. Only a few of them yield a preliminary conclusion of billions of years; those which do are based on evolutionary assumptions which cannot be verified.

Certain variables can throw off the accuracy of a clock. A worldwide flood, for instance, would have speeded up a clock causing something very young to appear to be very old. (Remember the diatomaceous rock with the whale found on its tail. The formation of other geological wonders such as the Grand Canyon also are examples.)

In the past, when many scientists believed that evolutionism was indisputably true, it seemed there was no choice but to accept the ages espoused by that theory. Since evolutionists “knew” the Earth was old, clocks were interpreted accordingly. But, as we have learned more and more about nature’s clocks, their testimony has grown more inconsistent. It has become clear that there is something drastically wrong with the evolutionary claims of an ancient universe. Nature’s clocks attest to a young Earth and universe.