Taking a Bite Out of the Speed of Light

The Law of Decay

There is an alternative solution to the idea of an instantaneous, mature creation. This alternative view doesn’t invalidate the instantaneous “light trails.” It has to do with the speed of light and the second law of thermodynamics—the physical law of decay called the “curse” in scripture.

One of the most strongly held evolutionary ideas is that the speed of light has been constant and unchanging throughout time. Such an assumption provides the evolutionist with the hope that radiometric dating will validate the theory of a universe 15–20 billion years old.

However, the Bible reveals that creation has been cursed (Genesis 3) and is therefore subject to the law of decay. As a result, things wear out, grow old and die, burn out and, in general, fall apart. All types of energy become useless after they are spent. (see fig. 18.) This includes every part of creation, including physical light (the electromagnetic spectrum) which was created on day one of the creation week. The stars and their light were not restored until day four. Not only is the energy which powers the stars’ internal nuclear furnace being used up, but the light each star emits may have been gradually slowing down over the centuries.

Figure 18. THE LAW OF DECAY

The Speed of Light

Barry Setterfield, an Australian astronomer and physicist, has done extensive research regarding the speed of light. His research seems to invalidate the assumption that the speed of light has been constant, and confirms the biblical truth that every part of creation is subject to the law of decay—including light.

Barry Setterfield examined the data regarding the speed of light, and much to his amazement, the results revealed a pattern of decay throughout the passage of time. So the speed of light has not been constant, as evolutionists thought. Setterfield’s conclusions reveal that light traveled much faster in the past. Such a discovery should have been expected. Why would everything in creation be subject to the second law of thermodynamics (decay) except for one part—the electromagnetic spectrum, or light? There are no exceptions. The entire creation “groaneth” as God’s Word declares (Rom. 8:22).

Although Setterfield was surprised at his Findings, he soon learned that there had been others in the scientific community who had also noticed this decay trend. A number of scientists had seen the trend and concluded that light must have traveled much more rapidly in the past. Over the years there had been articles to this effect which had appeared in scientific literature. Nevertheless, the evolutionary establishment continued to assume the constancy of the speed of light in spite of the actual physical data that would suggest otherwise. Such a startling revelation is, of course, controversial in the scientific community, even among creationists.

Setterfield created a graph based on the data from his research in order to determine light-speed measurements. This graph enabled him to estimate the speed of light backward to the point when the process of decay began shortly after the origin of the universe.

The graph indicates that the universe restoration began about six thousand years ago—the same figure creationists have settled upon based on biblical chronologies and genealogies. The graph also indicates that at some point around 4,000 B.C., the speed of light approached an infinite velocity signifying the beginning of creation. Setterfield had expected the speed of light to be still showing a small decline today, but found that it became more constant in recent decades.

A similar decay curve and a final leveling off can be seen in man’s life span after the Genesis Flood. Scripture reveals that up to the time of the Flood, the average life span of an individual was over 900 years. However, after the deluge and the simultaneous collapse of the pre-Flood canopy, man’s life span dropped dramatically. It finally leveled out to “3 score and 10” years, which became the norm. (see fig. 19.) 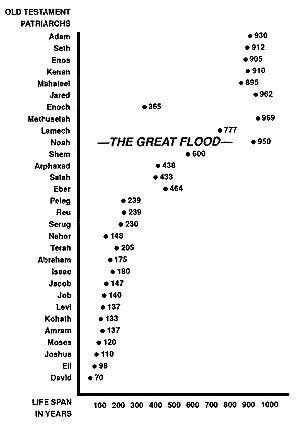 If Setterfield’s calculations are correct, the implications are truly staggering. The furthest objects which astronomers can see from the Earth are called quasars. Quasars are stars which, when calculated by the current speed of light, are considered to be 10 billion light years away. However, using Setterfield’s findings on the velocity of light, because light was traveling much faster at the beginning of creation, the light could have reached Earth in 6,000 years. This is further evidence that our universe is only about 6,000 years old. By Setterfield’s calculations, on creation day, the speed of light was so great that light traveled the 50,000 light-years from the center of our galaxy to the Earth in just 3.2 seconds. (see fig. 20.) In other words, the speed of light was infinite or instantaneous. Such a disclosure devastates evolutionism and its assumption of an ancient universe. 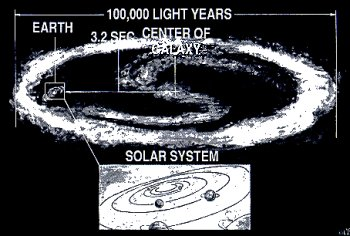 At this point, no doubt this question has crossed your mind: What about radiometric dating? Hasn’t carbon-14 and radioactive uranium dating proven that the Earth is billions of years old? We shall investigate this “sacred cow” of evolutionism in Volume IX, covering in full radioactive dating and the assumptions and flaws associated with each method used in dating rocks, bones and fossils. In the remaining pages of this volume, we shall look at a number of additional clocks which testify to a young Earth and young creation.

Barry Setterfield’s work forces one to consider interesting possibilities: Is there a Creator? Is the universe young, which would substantiate biblical chronology?

Setterfield’s work is exciting. But of course, no theory is without the possibility of flaw, even if it beautifully matches the truth of scripture. So, although it is difficult to see how, future discovery may show it to be incorrect. Even if this should happen, the lesson it shows will have been extremely valuable. Just as the mighty walls of Jericho came suddenly tumbling down, a simple discovery in science is capable of demolishing an entire sacred edifice of supposedly unshakable certainty. It seems the story of Jack and his beanstalk is closer to the truth than the 21 st-century myth of evolutionism.